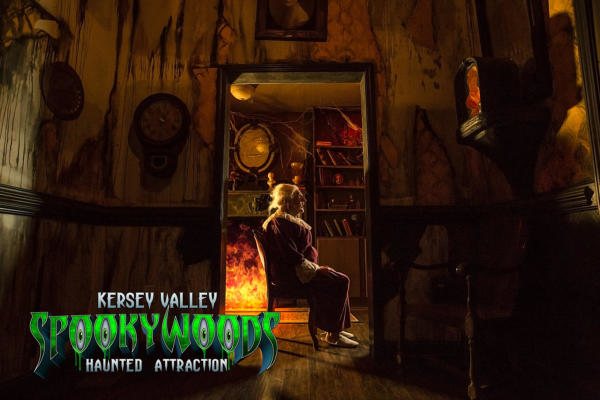 Kersey Valley Spookywoods in Archdale has made the front page of Greensboro's largest newspaper - Greensboro News & Record, along with its e-edition. The haunted attraction opened its doors for the 2017 Halloween Season on September 29th, and will be delivering tons of terror until the first weekend of November.

Featuring a number of haunted attractions at one great location, Spookywoods Haunted Attraction is sure to satisfy the appetite for fright that many have had all year long. Owner, Tony Wohlgemuth told Greensboro News & Record that the fun started back in the '80s when he set up an attraction and charged just $2 per ticket. Over 4,500 thrill seekers now visit the attraction each night during the Halloween Season.

Greensboro News & Record touched on the subject of the recent Spookywoods billboard that received backlash due to its photo. Like any haunted attraction, the photo used was graphic and showed "Sydney Wired Up."

The complaints rolled in and left Spookywoods "without a signature scare icon one day before the beginning of its month-long run at Kersey Valley Attractions on Sept. 29." Wohlgemuth said during his interview that he and his crew strive for realism at the attraction, where people pay good money to be scared out of their minds.

Matt Patterson, office manager of the attraction, said in his workshop, "We had no idea we were going to get that response." He continued to tell Greensboro News & Record, "Some people thought they were real cuts and real barbed wire so I guess I did my job."

Wohlgemuth said that "Sydney Wired Up" became a "social media phenomenon" long before the billboard backlash took place. He's already working on the image for 2018 and we're interested to see what he and the Spookywoods Crew come up with!

Click here to check out attraction details and 2017 dates for Spookywoods!