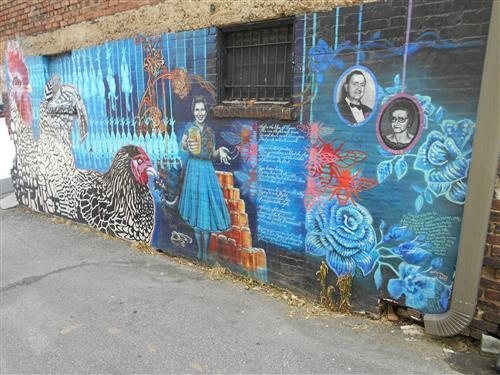 Named after the chickens that used to populate it during Asheville's humble beginnings, Chicken Alley still exists as a small, narrow alley in a populated section of the city. While a street sign also marks the location of the alley, a large mural by local artist Molly Must depicting chickens is a much better indicator for visitors.

So...is the ghost that haunts Chicken Alley the very one that the Troma film, Poultrygeist, was named after? Not exactly. The alley is supposedly haunted by the ghost of Dr. Jamie Smith, a physician who practiced in Asheville during the 19th century. Dr. Smith was known by locals not only for his medical skills, but also for his black fedora, long duster, medicine bag, and silver-tipped cane. An incident in 1902 at
Broadway's Tavern resulted in Dr. Smith attempting to break up a fight, but led to him being stabbed in the chest. Dr. Smith was killed instantly and his murderer was never apprehended.

His reason for lingering in the alley is still undecided, but spottings of his ghost, identified by his fedora, duster, and medicine bag, have been occurring for over a century. If you decide to take a stroll through Chicken Alley, keep en ear out for the melodic tapping of Smith's cane.