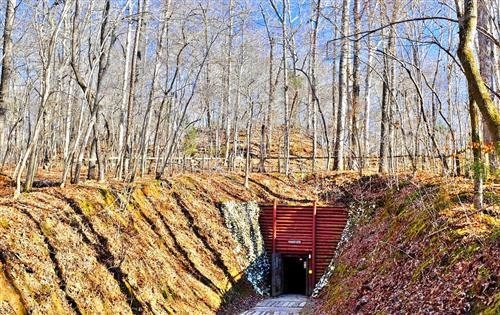 During an afternoon stroll in 1799, Conrad Reed discovered a 17 pound, yellow rock on the property of his father's farm. After keeping it as an unusual oddity for nearly three years, a Fayetteville jeweler offered $3.50 to the Reed family for it. They accepted, not realizing that its market value was $3500.

The significance of this find was not only that it led to the creation of the Reed Gold Mine, but that it was also the first documented gold find in the United States. North Carolina would lead the U.S. gold charge for over four decades, claiming combined values of over $1 million each year before The California Gold Rush consumed the nation.

The ghost story that surrounds Reed's Gold Mine involves Reed's former neighbor, Eleanor Mills. Supposedly, an argument between Eleanor and her husband, Eugene, led to her falling down the stairs. Eugene had left the house at the time, unaware that Eleanor's fall had been fatal. After he returned several hours later, he was horrified to see Eleanor's corpse...still screaming. Consumed by panic and unable to make the noises stop, Eugene dumped his wife's body down a mine shaft near Reed's property. It is said that Eleanor has never stopped screaming.