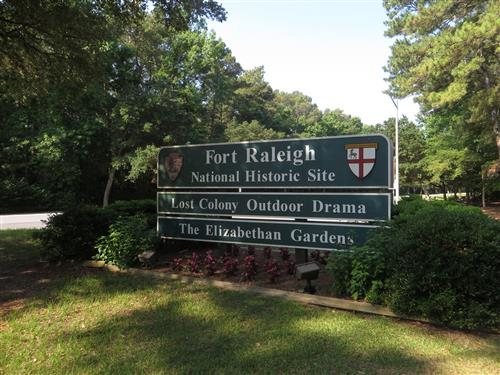 While serving as a tribute to Native Americans and African Americans who have lived on Roanoake Island, the site is most well-known for being the location of the Roanoke Colony. Established in 1585 by Queen Elizabeth I in an attempt to create a permanent English settlement, the charter was originally funded by Sir Humphrey Gilbert, but was passed to his half-brother, Sir Walter Raleigh, after Gilbert's accidental death.

After an initial settlement that went horribly wrong, leading to the disappearance of all 100+ of the original settlers, a new group of 115 men, women, and children were dispatched to create a new colony on Roanoke in 1587. Despite promises that supplies would be brought from England, the raging Anglo-Spanish War delayed supplies for three years, and when the ship finally arrived, it discovered that the colony has been abandoned. Dismantled houses and proper clean-up suggest that the move was planned, but not a single settler, living or dead, was ever found.

Since the site is marred by an intense and frightening history, the paranormal stories that surround it are not surprising. The general consensus is that the site is haunted by the ghost of Virginia Dare, who was the granddaughter of John White, Raleigh's close friend and the individual who led the “Lost Colony's” settlers to America. Virginia Dare, being the first English child born in the New World, was among the disappeared settlers.