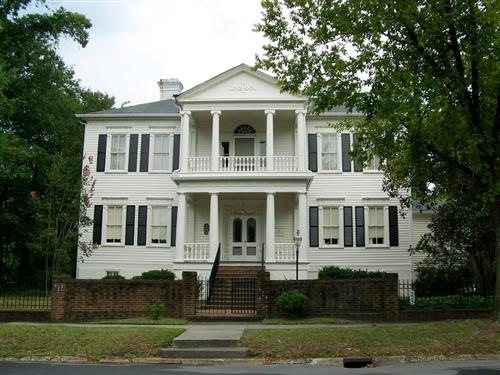 The Sandford House is a historic building in Fayetteville that is part of Heritage Square. The land is owned by The Woman's Club of Fayetteville, who also rented the Sandford House from 1941-1945 to house unmarried working women during World War II. According to legend, the hauntings began during the Civil War, where a young couple attempted to flee from the house out of fear of the approaching Union Army. The tunnel that they used, however, was blown up, and the couple's bodies were never recovered. Since then, the woman's apparation has been seen on one of the staircases in the Sandford House, leading to her being deemed "The Lady In Black." The man, meanwhile, supposedly haunts the rented out apartments and watches television with the tenents. Tenents have reported indentations on couches and unexplainable channel changes. The house is open to the public, but is used exclusively for special events and Woman's Club of Fayetteville meetings.